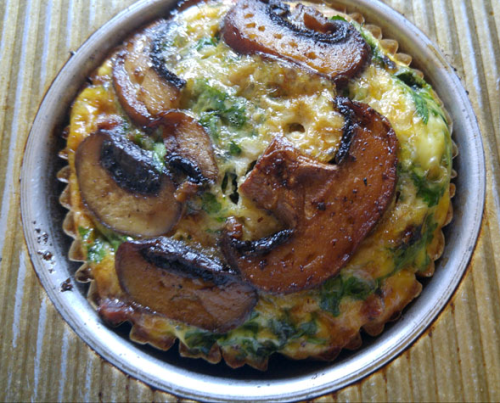 The above quiche is dairy free, sugar free, wheat and grain free and crust less.  And it's still delicious.  More about how to make it later.  Here's why I made it.

On Friday, July 1, I started Dr. Kellyann's Bone Broth diet.  I jumped in after someone I trust told me about it.  It requires 2 non-consecutive days of fasting on bone broth, and then the food is similar to Whole 30.  My first day was a fast day on bone broth (water and tea and coffee, too) because Friday's aren't as busy.  When I say I jumped in, I had not read the book, so I got it from the library -- and began to listen to the audio book during Friday.  The electronic version was checked out, but the audio was available.

The short summary is that in addition to the two fasting days, I was signing up for 21 days of no sweets of any kind except fresh fruit in limited quantities, no dairy (and I eat dairy every day sometimes three times a day), no grains, gluten (I've been gluten free for 3 years) or psuedo grains (read quinoa), no legumes (much of what I bake is made with sprouted lentil flour.) Yes, a big, big change.  And, I knew a change was necessary.  This was supposed to jump start my system into major fat burning.  That's just what I wanted.

I know from previous fasts that the first 3 days are the hardest and those are behind me.  It's day 4 and so far, so good.  My energy seems to be okay for about 3/4 of the day, and then I just want to rest. The most difficult part of this is that one is supposed to eat 3 meals a day.  I usually only eat a snack around the middle of the day, and then a late and healthy dinner started out with my delicious lentil flour crackers, organic or raw cheese and guacamole on the side accompanied by a glass of wine.  Oh, did I mention for the next 21 days -- no alcohol either.

So now I've had to start new habits.  Breakfast -- which means I have to rise earlier.  For 2 of the last 3 days I made scrambles.

Day 2- Arugula, cauliflower, green onion, tomato seasoned with graham marsala, pink salt and pepper with dulce flakes on top.  Blueberries on the side.

Day 4- I really wanted something different for this day, and discovered I had a quart of my chicken and greens soup - Chicken bone broth, kale, spinach, arugula, cilantro and dandelion greens, with zucchini squash, green onion, garlic, chicken meat, spiced with cumin, lemongrass, coriander, pink salt just sitting the the fridge.  So I pulled it out, heated it up, and decided to poach some eggs in it.

Normally, I always crack eggs separately and then put them in my mixtures.  It's a system I worked out when ages ago I got a bad egg.  Rarely happens, maybe one in over a thousand (remember I use over 100 eggs a week).  It has happened though and I worked out a system to not spoil everything by cracking the 1 in a 1000 egg into my bowl.  But, this morning I was in a hurry.  So many things I wanted to accomplish, so I just cracked the egg into the pot of hot soup, and you guessed it, that 1 in a thousand egg popped up, not reeking smelly bad, but looking like it wasn't far away.  So I threw out the soup and began again.  You can bet I won't forego cracking each egg separately again.

With the soup no longer an option, I poached a couple eggs in chicken bone broth with chopped fresh spinach thrown in.  And you guessed it -- blueberries on the side.  I have a really large box of blueberries that I got at the La Canada Farmers market from Nicholas Organic Farms.  Yummy, Yummy.

I needed something I could grab and go.  This was all taking way to long.  Then, I had an idea.  In her book Dr. KellyAnn has a recipe for crust less quiche.  It's just eggs, asparagus and spices cooked in a pie plate.  Sometimes as a private chef I made single portion crust-less quiche for my clients.  I started playing with the recipe in my head, and realized that instead of milk and cream -- one could use chicken stock.  So, I made the crust-less quiche above. Really I made several so I could keep them in the fridge and grab one when I was in a hurry.  Mine included broccoli, bell pepper, maui onion, and crimini mushroom sprinkled with graham marsala,  crumbled bacon and sliced mushroom on top.

Okay, I want to get this post up, but a little later I'll do a post with complete instructions on how to make individual crust-less quiche.

The comments to this entry are closed.